Evidence Recorder, part of the Leica Geosystems Incident Mapping Suite, is the world's best-selling evidence collection software built specifically for the Crash and Crime reconstructionist. Review your measurements in 2D or 3D and confirm there are no errors or missing points before leaving the scene. Evidence captured-correct and comprehensive, every-time.

Why do you need an Evidence Recorder S910 Bundle?

If you answered yes to any of these questions, then we have the solution for you!

Using a Disto S910 and Evidence Recorder allows crime and crash scene investigators to digitally capture the location of critical evidence and other scene details with millimeter accuracy. This solution is ideal for agencies with restricted budgets and who have a need to deploy mapping solutions to numerous investigators throughout their agency.

The data you capture is compatible with most drawing programs, which means you can use the mapped data to base your scene diagrams on. For the most seamless workflow, we also offer a desktop drawing program, Map360.

Use the assistant feature to quickly set up at the scene. Choose between Occupy Baseline, Occupy Reference Point, or Quick Setup to easily locate the Disto S910 and start collecting evidence instantly! The intuitive interface allows for easy navigation of the measuring tools and ability to view your measurements in 2D and 3D, in realtime as you take them at the scene. Verify your measured points before leaving the scene. Create accurate and compelling diagrams in minutes by importing measurements and line work directly into Map360 from Evidence Recorder. The photos, written and audio notes taken at the scene will also import with your data points to include with your final deliverables.

Bundles do not include a tablet 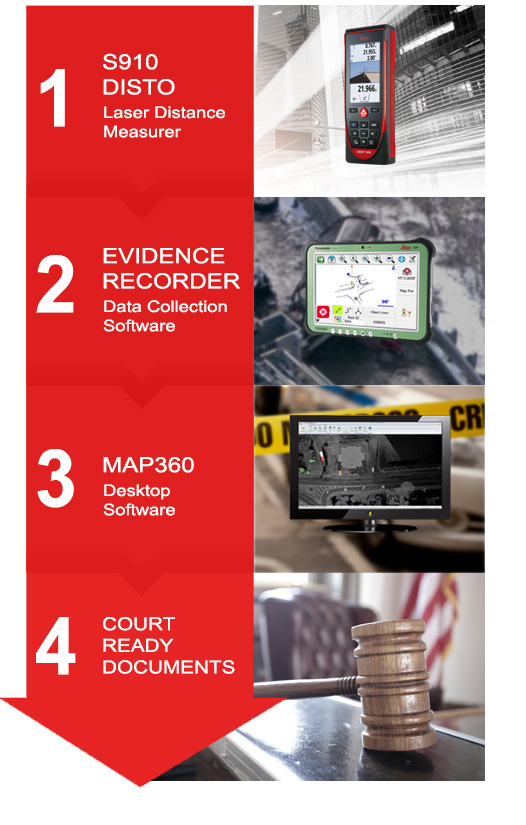