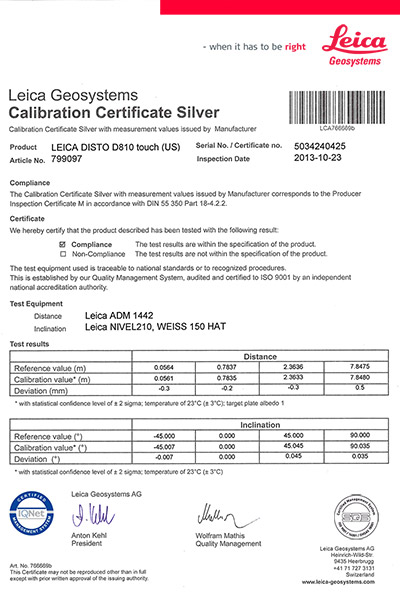 A laser is a focused beam of light. The more powerful the laser, the more focused it remains at longer distances.

Distos are a Class 2 laser, so not very powerful (which makes them safe to use around a crowded job site). As you've seen, the "dot" can get pretty big at long distances -- like the size of a plate when you get out to the maximum range.

The accuracy of a disto at long distances has more to do with the technology we have developed to measure the return signal of the laser than with the strength of the laser itself. An accurate measurement can be ascertained from a relatively weak return signal.

At longer distances, how reflective your target is will impact your ability to get a reading from that big laser dot. For example, if the 358 sign in this video were black instead of white, we probably would have gotten a 255 error.

Based on the device, this may depend. I would recommend that you speak directly with a support rep.
You can do so by submitting a support ticket on MyWorld. A DISTO expert will help you determine if your device can be recalibrated.

Hello, I bought a E7100i. I didn't get a certificate with it, which makes me wonder if it's authentic. The cardboard backing that the device was packaged in has a sticker on it which I presume has the serial number and other things printed on it. I tried registering the device to get the 3 year warranty, but wasn't sure where to find the serial number and other numbers the registration asked for.

Hi Warren, could you please let me know if you ordered your E7100i from our site directly?
It would be helpful to know where this DISTO was purchased from so we can help you out with this. Thanks!

It was "sold by: Amazon.com Services, LLC". I would think it's authentic, but no certificate.

Hi Warren, I would recommend reaching out directly to the seller to determine the authenticity and they will hopefully be able to provide any missing documentation. You should also be able to find the registration info/serial number under the battery. If this information registers properly on MyWorld you should be all set. Please let us know if we can help further!

Hi! I just purchased a Disto 3D that was used for demo from a store near by, the device is mint condition but i would still like to have it checked for calibration and general condition, is it possible to do so with the Disto 3D, and if yes would you recommend a maintenance schedule or is it juste the kind of unit that is built for the long run if well taken care of ?
It is a 2018 new generation model.
Thank you!