While we have spent time hovering about near-to-the-ground (point) clouds in past posts, this one begins amidst the lower atmospheric variety; flying from the French Riviera to the islands of Sardinia and Malta. Each of these landmasses amid the Mediterranean are home to plentiful prehistoric remains of an architectural type specific to their shores. Their stony construction and states of ruin make ideal fodder for the observant eye of the laser scanner much as their mild climates permit an extended field season for its supervisor. So pack your shades and sunscreen (still required in the fall) and join the BLK360 and I for island hopping!

Sardinia, our first stop, is an island approximately the size of Vermont situated west of the Italian peninsula. While now a territory of Italy, the era of interest to my representational research comes thousands of years prior to Italian unification in the 19th century. During the period 1500-400 B.C. the island was inhabited by a civilization of tribal states identified as Nuraghic, in reference to the conic structures, ‘nuraghe’, that they left behind. The 7,000+ such structures on the island vary in size and layout but share the construction method of cyclopean masonry and form of circular ‘tholos’ chambers created through corbelling.

Readers may recall that I’ve been inadvertently tracing the arc (here quite literally) of the corbelled spanning method across Europe; from Scottish chambered cairns to French castle turrets. This simple stacking and overlapping of stones to create rudimentary roofs and overhangs reached unprecedented heights - 25’ (7.6 m) in fact - at Nuraghe Losa, built in the 14th century BC. Losa’s central tower once featured three tholos chambers stacked atop one another to measure in at 62’ (19 m) overall. This central tower was surrounded by three smaller turrets to form a thick triangular ‘trilobate’ plan of basaltic blocks. Archaeologists speculate that the nuraghe would have made for an ideal fortress or storehouse, though suspect that precise functions varied across time. Like many of the nuraghe, Losa has survived the centuries only partially intact. With most of its towers and later Iron Age additions reduced to rubble, the BLK360 and I captured what we could before the site closed for the customary riposo (an Italian equivalent to a siesta).

If contemporary Sardinians have devised a daily practice to accommodate their afternoon nap, their Bronze Age ancestors also developed an architectural type for eternal rest in megalithic monuments referred to as ‘Giant’s Graves’. Related in plan to the long barrows and gallery graves I encountered in England and France respectively, these funerary monuments feature an embracing, elliptical exterior court traced by megaliths. The central of these stones, or stele, typically towers over the others; an obelisk of sorts.

Such was once the case at Giant’s Grave Su Pranu. Unfortunately, by the time the BLK360 and I arrived on the scene its central stele had long since fallen and split upon the grave behind. The now-horizontal stele resting upon the overgrown gallery orthostats further recalled many of the dolmens scanned earlier, making for quick work by the BLK and I; a row of setups down the middle, flanking scans atop the remnants of the earthen covering, and a set about the perimeter court - here convex, rather than the typical concave, in keeping with the outline of the encircling mound behind.

To scan a cupped court, I would have to travel several millennia further back in time and some 400 miles south to the island of Malta. An independent nation 50 miles from the tip of Sicily, just about every empire in the neighborhood has taken turns ruling the strategically positioned landmass; the Phoenicians, Carthaginians, Romans, Greeks, Arabs, Normans, Aragonese, Knights of St. John, French, and - just long enough to make English an official language - the British. Long before any of them, however, Malta enjoyed a prosperous prehistory. Until the recent dating of sites in Turkey and the Middle East, in fact, the megalithic temples attesting to a complex civilization were believed to be the earliest intact buildings, ranging in construction from 3600-2500 B.C.

Like the Sardinian nuraghe, these temples - whose precise function can only be hypothesized - share family traits. Typically facing south-southeast is an ovular forecourt fronted by a monumental facade of upright stones, or orthostats. A post-and-lintel ‘trilithon’ entry therein typically passes into a series of interior chambers whose lobed form is defined by additional megaliths of the local limestone.

Following this general diagram is the spectacularly sited set of three temples at Mnajdra whose shared forecourt overlooks Malta’s southern coastline on the Mediterranean. Constructed of coralline limestone - harder than the globigerina variety used up the slope at the larger Ħaġar Qim complex - several of the Mnajdra temples still stand to an impressive height some five thousand years after their construction. The lowest temple, for instance, retains its concave facade with stone benches aside a trilithon entry. The BLK360 and I, enjoying the same shelter from sun and sea-salty winds as the temple itself courtesy of a modern steel and canvas tent, worked our way through the apses and ‘cloverleaf’ chambers of the temples. Careful attention was paid to capture interior features like smaller trilithon niches and decorated stones.

An island away, on the lesser Maltese landmass of Gozo, the BLK and I surveyed the still more storied remains of the Ġgantija Temples. This set of side-by-side five apse temples has a rich history as the subject of representation efforts, from an 1839 set of orthographic plan engravings by typographer Ambroise-Firmin Didot to C.F. van Brockdorff’s 1828 watercolors of the temple’s excavation. A century later, renowned architect Le Corbusier rather romantically remarked that “…the man that made this door is my brother across time” upon his visit to the temples. The resultant scans and plans produced by the BLK and I might be said to continue this modern history of appreciation while contrasting its methods of analysis.

Less intact than the megalithic remains at Mnajdra and Ġgantija, Ta’ Ħaġrat and the nearby Skorba Temples proved equally worthy scanning subjects. So too did the archaeological contents of the temples prove fascinating in regard to the subject of architectural representation, prompting the question...

Where and when is architecture?

Conversing with an architect (indeed architects conversing with each other) a comment is not uncommonly made implying the architect is constructing a building. Unless the architect is engaged in a design-build practice or capable of restraining their penchant for the pedantic, some variant of the correction ‘architects don’t build buildings, they make drawings of buildings (for others to build)’ is likely to surface, if not derail the conversation into a disciplinary debate regarding the very locus of architecture.

Does architecture refer to the building as such? Or the idea of the building? Or the sketches, renderings, models, construction documents, and other representational efforts that communicate that idea? Might it be all of the above?

A seemingly straightforward question gains complexity the longer one thinks on it; as many have only to create more questions. Here is perhaps not the place to belabor these queries any further abstractly, but rather focus upon a small inventory of artifacts from the Maltese temples which bring them to the fore:

If architecture is tasked with making representations of buildings, these earliest examples of the practice may attest to the origin of the discipline. Of course, there can only be speculation as to whether these prehistoric traces pre- or post-date the erection of the temples, highlighting another crucial distinction: Are representations of buildings already built - lacking the same projective intent as those preceding construction - architectural as well? Or are these more accurately understood as objets d’art?

It’s once again worth citing examples from my scanning survey. The first takes us back to Sardinia, where prehistoric models of the nuraghe have been found at the sites themselves. Just as the Maltese temple models offer archaeologists clues as to the roofing technique of the temple ruins, so too have these tower models led researchers to conjecture the initial appearance of the nuraghe. The models here were unearthed not from within the Bronze Age nuraghe, but from surrounding structures that have been dated to subsequent Iron Age occupations when the nuraghe may have already been in a state of ruin.

Take, for example, the Nuraghe Palmavera where a model stands within an adjacent 39’ (11.8 m) diameter circular structure ringed by benches. Referred to as a ‘meeting house’, various theories ascribe religious, ritualistic, or simply nostalgic significance to the model therein. But, my disciplinary bias notwithstanding, might it also have been a tool of architectural understanding - a kind of post-construction document? 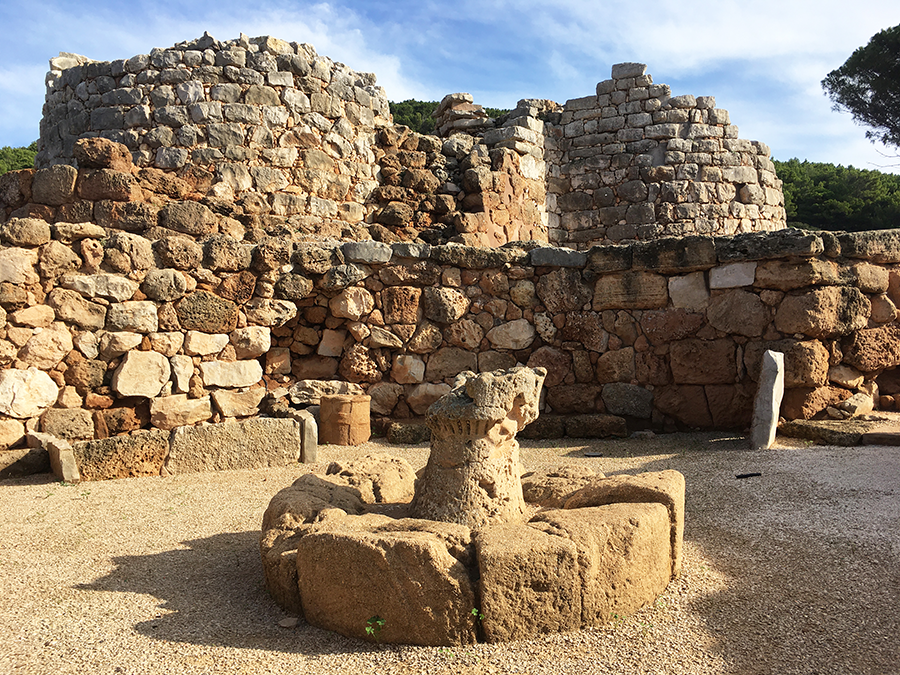 Another example of this post-construction representation is my scanning survey itself. Whereas other media - pencil or pen; (physical) modelling material or (digital) modelling software - lend themselves to both recording a referent and inventing a novel form, the very nature of 3D scanning is confined to the former. In other words, ‘reality capture’ requires a pre-existing reality to capture.

From Scotland to England to France to Sardinia to Malta, it seems we have circled back around to the question prompted by my initial efforts to integrate 3D scanning into the architectural design process during graduate studies at the Harvard Graduate School of Design:

Is 3D scanning limited to the disciplines I’ve encountered on these travels - archaeology, preservation, reconstruction – and only of peripheral use in architecture?

As the BLK360 and I near the end of our scanning survey, I suspect I’ll unearth more questions before coming to definitive answers. In a final post, we will visit the Italian mainland to investigate the influential and ambiguous Etruscan civilization. We will pilgrimage to Rome to pay our respects to the epicenter of the empire of classical antiquity whose structures we studied as far as afield as northern England. And, fittingly, we will wrap where the temporal scope of our study does the same, where architectural representation obtained a new - indeed modern - consciousness in Florence. I hope you’ll join the scanner and its supervisor for one last swing through some significant stones in search of still more representation queries. A dopo!