How geologist Gianluca Fallacara uses the BLK3D for the survey of the Basilica Santi Medici in Alberobello, Italy.

The famous city of Alberobello (Puglia) has about 2000 stone houses, called "trulli", in its historic center. These houses were declared a World Heritage Site by UNESCO in 1996. It is these buildings that make the city known throughout the world and, therefore, a popular tourism destination.

However, the famous trulli are not the only attraction of Alberobello. One of the most important monuments of the city, located in the northern part of the historic center, is the Basilica Minore, dedicated to the patron saints of the city, the SS. Medici Cosma and Damiano.

The current layout of the Basilica dates back to 1885, the work of the well-known architect Antonio Curri. An important element of the Basilica was never realized in the context of the initial project, which completed in 1914: the majestic dome, foreseen in the center of the church's Latin cross-shaped plan. In symbolism, the dome is a fundamental element as it represents the sky and the universe, as well as being the central element of the religious monument.

After so many years, the dome could finally find its realization through a technologically very advanced and innovative project developed by the DICAR department of the Polytechnic of Bari, respecting the vision and philosophy of the architect Antonio Curri of the second half of the nineteenth century. The completion of the dome represents a technical and technological challenge, which requires converging different types of experts in different fields such as architecture, engineering and 3D survey and modeling.

Gianluca Fallacara, Geologist with specialization in hydrogeology, geotechnics and topographic surveys, and several years of experience in photogrammetry, was commissioned to carry out an internal survey of the church, in particular of the octagon (i.e. the base of the dome) and of the exteriors, that is the part above the octagon.

“My task was to obtain the internal and external point clouds, in order to create a 3D model that the architects will use for the different design phases. For the survey of the external part of the church, where the dome will be erected, I used drone photogrammetry. For the internal survey I decided to rely on the Leica BLK3D." 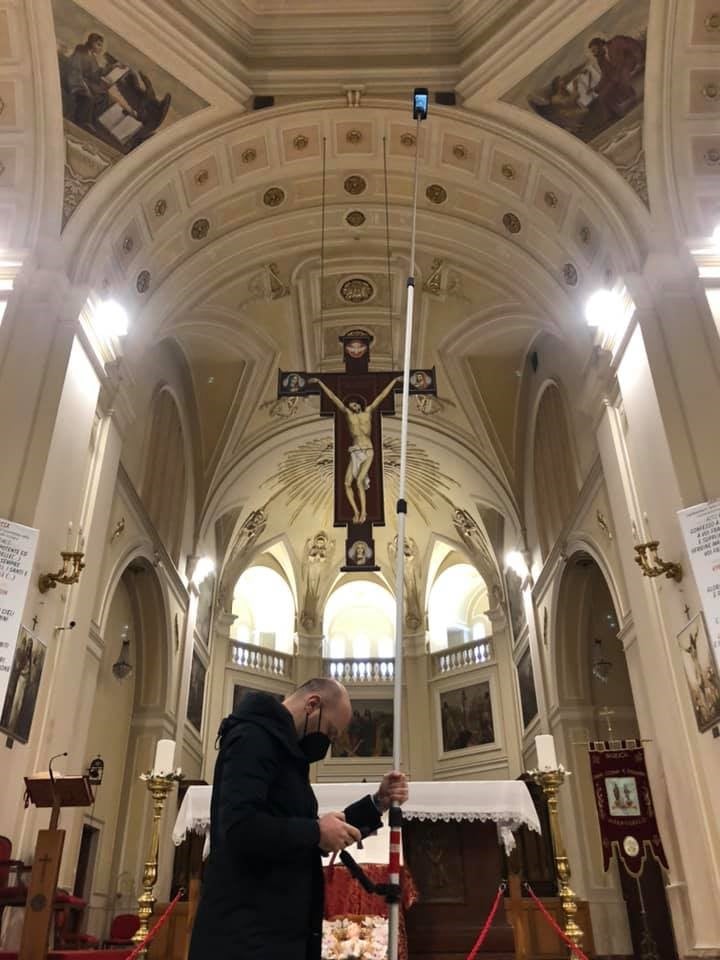 BLK3D mounted on a 5-meter pole

The Image Group functionality of BLK3D allows users to capture up to 500 pairs of stereo images which can be used to calculate image-based point clouds and orthophotos. This data capture method is very efficient, as images captured with BLK3D are automatically scaled and the vertical axis is set by the BLK3D’s inbuilt tilt sensors. Moreover, it completely eliminates the need for on-site reference measurements.

"I decided to test the BLK3D in this context, as I was not allowed to use a drone for the interiors, but I still needed to obtain a point cloud and a texturized 3D model, and complete the survey quickly."

The main target of the survey is the part below the dome, the octagon. First, Fallacara mounted the BLK3D on a 5-meter pole, allowing him to get as close as possible to the octagon, whilst controlling the BLK3D remotely using a tablet connected to a hotspot.

To further test the BLK3D, Fallacara decided to carry out a full survey of the church, and not just of the octagon. Using the Image Group function, he captures 271 pairs of stereo photos, captured along the aisles, without having to focus too much on the photogrammetric survey technique, and without thinking too much about overlapping images. On the octagon of the dome, he used an overlap between images of about 70% to have a good mesh and ensure the best results.

The survey with 271 pairs of images was completed in about 30 minutes, without the need to use targets or reference measurements.

Remote control of the BLK3D via tablet.

“I had an exceptional result for the point cloud, beyond expectations.

From inside the church, I could not connect to the GPS signal, but the BLK3D was connected via the internet to a "virtual" GPS point via the network. This allowed Metashape to locate the images correctly, reconstructing the interior of the church, and perfectly the entire octagon.

With the BLK3D you have the advantage of not having to use targets during the survey, as you do with a drone. Additionally, you do not have to correct the 3D model, because it is already corrected and calibrated. This saves a lot of time in the surveying and processing phase.

By processing the BLK3D Image Group in Metashape, I obtained the 3D model I was looking for, which I can export in the formats requested by architects. For example, I can extract the 3D mesh model (obj model), or the texture, or I can obtain the orthophoto-mosaic of the octagon with a high graphic resolution. From the orthophoto-mosaic, I was able to measure and verify all the dimensions of the octagon with great precision."

In photogrammetry, an orthophoto-mosaic is a geometrically corrected image calculated based on multiple images, which can be used like a scaled plan.

For further confirmation of the dimensions of the octagon, Fallacara compared the measurements obtained from the orthophoto-mosaic and the 3D Image captured with the Reality Capture function. The BLK3D Reality Capture function allows you to measure in real-time in a 3D Image, directly on the BLK3D screen, using the principle of stereo-photogrammetry.

"I captured a 3D image using the BLK3D Reality Capture function to be used as reference. I got the same result that I got from the measurement in the point cloud, perfectly coherent."

As a final step, Fallacara combined the Metashape point clouds of the interior and exterior to create a total 3D model of the church. This is one of the first examples in the world of the use of BLK3D in a project that includes architectural, technical and virtual reality fields.

In fact, the next phase consists in using the 3D model obtained with BLK3D to create an exhibition with Augmented Reality. The construction project of the dome is in fact a large, demanding, and complex work which will be completed only in the coming years. In the meantime, the 3D model of Fallacara will be used to provide visitors to the church with a unique experience: through the special glasses, the visitor will be able to "view" the dome in its final realization, and immerse themselves completely in the atmosphere and in the original vision of the late nineteenth century.

The BLK3D was born as a measuring instrument, but in reality, it is much more” concludes Fallacara.

“I consider the BLK3D among the best tools on the market for cost / benefit. I obtained a result that in photogrammetry, under the same conditions, it is not possible to have with other instruments. In addition, with BLK3D I optimize times, I optimize the use of the PC and at any time I can show the model to my customers and clients!”

This video shows the different software options for the BLK Demo in...