Business storytelling is a big part of promoting your company and encouraging potential customers to buy from you, or for hiring new employees. Reality capture technology is becoming more and more popular for such stories. Paolo Tosolini of Tosolini Productions, based in Seattle, specializes in business storytelling using emerging media—interactive touch screen solutions for events, 3D virtual tours, and AR/VR/360 immersive media for various companies, including Deloitte and Microsoft.

Paolo and his team have used multiple kinds of reality capture and imaging technology to digitally preserve several important buildings and landmarks in and around Seattle, including Microsoft’s “Lake Bill,” an outdoor space at the Microsoft campus in Redmond, Washington that was lost during their most recent renovation.

But why is it so important for Microsoft to preserve Lake Bill? It was “famous among veteran Microsofties” according to Nat Levy on GeekWire. A former Microsoft employee on Quora answered the question “What’s the story behind Lake Bill on Microsoft Campus?” It was “the locale for numerous promotions and pranks” and this employee once arrive to work to find that “the entire lake [was] covered in floating blue exercise balls to promote the latest release of Windows.” He also said that “Bill Gates’ original corner office on the second floor in Building 4 overlooked the pond that became known as Lake Bill.” 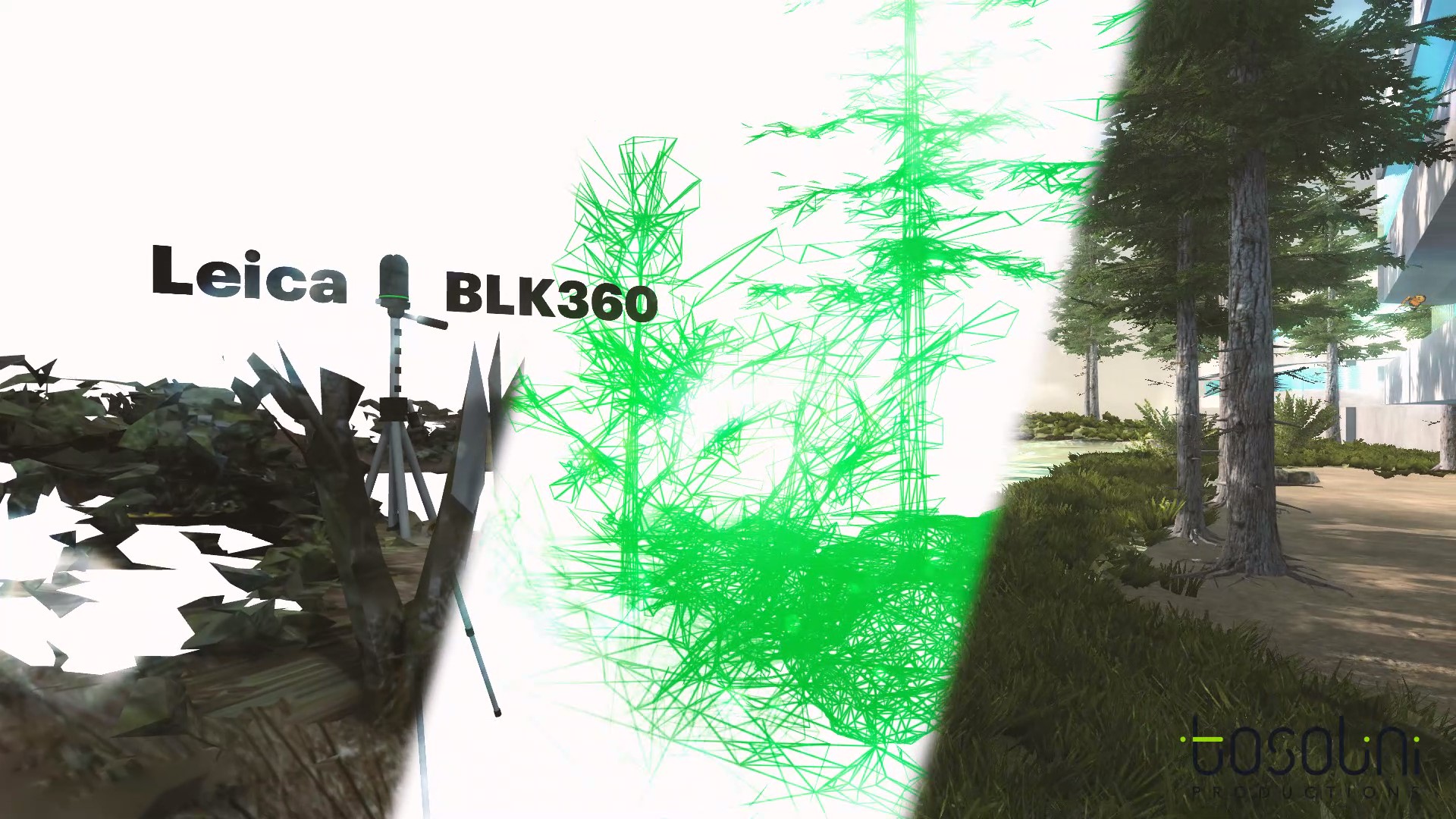 In 2019, Microsoft, a client of Tosolini Productions, began a major overhaul of their original headquarters just across Lake Washington from Seattle. The renovation spanned their 500-acre campus and included adding 17 new buildings, 6.7 million square feet of revamped workspace, trails, and sports fields in four “villages.” An unfortunate loss due to the overhaul is Lake Bill. The lake was named after Microsoft co-founder Bill Gates, and the outdoor space was created for employees to take a break, eat lunch, hold events, or socialize.

Lake Bill is a part of Microsoft’s business story about their workplace. Yet stories, with current reality capture and VR technologies, can be told in very immersive ways. “Lake Bill was going to disappear forever, so we decided to create a digital memory of it,” Paolo said. “Being an outdoor space, we used the BLK360, a compact imaging laser scanner, to capture a 3D virtual tour as a reference.”

The BLK360 then allowed Paolo to scan outdoors and in larger locations like Lake Bill, among others, to add to his Matterport system. “The BLK360 complements the Matterport camera quite well,” Paolo said, “as its LiDAR technology works well in plain sun and features a longer reach.”

Because this project is so unique, we asked Paolo and his VR designer, Michael Gelon, to describe how they created a VR experience from BLK360 point clouds, and this is how they described their process.

“From a technical standpoint, the Leica scan was used as a blueprint to recreate a to-scale version of the space within Unity 3D, a real time engine. Considering the nature of the space, the scan lacked detail and completeness for the trees, surrounding buildings, and water.

The first step was to acquire an .obj model of the scan through the Matterport service and prepare it using Blender 3d. The ground was mostly useable, so it was separated from the vertical elements. The separate parts of the mesh were joined into one, and the polygon count was reduced through decimation.

Next, a fresh Unity 3D project was started. The Lake Bill .obj was imported, along with curated assets like ground textures, tree/rock models, and more developed elements like water shaders and koi fish. The Unity Asset Store contains many affordable tools to speed up production, and other sources to look at are Quixel Megascans, Substance Source, and CGTrader. Finally, the most recent VR integration framework was imported and used as a starting point for a new scene.

With the project setup complete, the next step was to build the virtual rendition of the space. The scan’s ground geometry was used with a few new, high resolution textures, and a lakebed was created from a simple cube. The space from the ground to the lakebed was filled with a few rock models, varying the scale and rotation throughout. The trees were replaced with virtual models of a similar species, using the original scan as a placement guide (toggling on and off during the process).

The buildings were mocked up with simple 3D shapes and tiled textures. Next the water plane was added, with a pre-established koi fish system. A day & night asset was used to provide appropriate, realistic lighting and sky detail. Once the placement, lighting, and vegetation was looking representative of the real space, basic VR teleportation was added to the scene.

The overall process was to “trace” the digital scan with assets intended for use in real time engines, resulting in a to-the-inch accurate rendition of the space that looks consistent and complete. Without the scan, this would have taken much longer to achieve.”

Now we’re ready to jump in with VR controls

The final step in the process was to add VR controls to move around and interact with the space. “This allows users to step inside the Microsoft campus via a VR headset and get a real feel for the scale and atmosphere of the lake,” Paolo said.

The result is a memory that can be experienced and explored from any angle.

Tosolini Productions published a YouTube video of the VR experience, and it is quite impressive to see LiDAR data and VR creativity working so well together. The VR experience of Lake Bill, in a sense, preserves a memory of something that no longer exists, and something that is an important part of the Microsoft story. For a world-renowned company, it’s a way to engage anyone interested in learning about their culture and workspace.

How about more outdoor spaces? Paolo’s website includes video from a photorealistic annotated tour of Mount Rainier’s hiking trails, which is a wonderful way to explore the wilderness surrounding the most prominent peak in the contiguous U.S. if you are unable to get there yourself.

How about flight and flight history? Tosolini also partnered with Microsoft to create AR experiences for exploring the Seattle Museum of Flight, and visitors can virtually “step inside” the cockpits of historic aircraft, including planes from WWII.

Or what about one of Seattle’s most important and famous industries: fishing? Paolo also captured the Seattle Fishermen’s Terminal, known for being the home port of crab fishing vessels from the show Deadliest Catch. His intent was to “discover a new location in my city, Seattle, and test a new BLK360 firmware update that enhanced the quality of the image.”

He decided to start capturing the terminal right before sunset, with the intent to challenge the BLK360 under various lighting conditions. “The result was very good, and I was surprised by the distance I could travel between scan points.” Check it out for yourself. As you move around the 3D model of the Fishermen’s Terminal, you’ll see the different light conditions change, ranging from daylight to dusk.